Discover the historic cafés of Bordeaux

There’s an art to drinking a cup of coffee in Bordeaux! From historic monuments to Art Nouveau masterpieces, the city is packed with iconic cafés, often full of history and anecdotes from a bygone era. To enjoy your next coffee break with a view, discover our selection of Bordeaux’s historic cafés.

THE MYTH OF THE CAVE

Bar Castan was founded in 1890 by Jean-René Castan, a former Lieutenant Commander and spice merchant. A skilful publicist, he modelled the interiors of his bar in a way that invited his customers to dream of faraway places. In 1900, he entrusted André Tournier with the task of decorating the bar. The resulting bold rocky decor was nothing but spectacular.

Entering this place feels like penetrating a cave. Originally, there were even fountains coming out of the walls to enhance the effect. You can admire the bar’s palm-shaped central pillar, as well as its frescoes, mosaics, seashell friezes... And to top it all off, a polychrome glass canopy that floods the place with sparkling light.

Before it was redesigned, the place greeted you with its magnificent crystal chandelier shining a thousand lights on the ceiling. It was like a lighthouse that illuminated this shady part of the Place des Quinconces. The Bistrot des Quinconces, as it was called, had a beautifully outdated decoration film set.
Bevelled glasses at the doors (still there), chrome-plated and gilded decorations, uncomfortable chairs, the place exuded something reassuring and intangible, something authentically “bistro.” Completely revamped in 2018, it became the “1925”. The crystal has disappeared, the chairs have become comfortable, the gilding is more discreet. Though the place now embraces the modern “brasserie chic” style, the mouldings on the ceiling lend the place a slight quaint Art Deco feel.

Why the Belle-Époque? Because the place was born during the Belle-Époque! Dating back to the middle of the 19th century, the Hôtel de Nantes the place exudes the sheer refinement of this era. It was actually one of the first hotels to welcome electric lighting and a lift.

Though the hotel is no longer in use, the restaurant has retained its magnificent original decorations dating back to 1870. Customers can admire one of the most beautiful Veillard & Co earthenware decorations there is. The restaurant’s elegant, flowery decor, vaguely reminiscent of Persian influences, easily makes you forget that you actually came here to eat.

With its splendid façade, the Café du Levant stands out from the rest the neighbourhood’s anonymous cafés; you can’t miss it. The façade’s oriental-inspired mosaic subtly introduces the interior’s decor, blending Art Deco and Art Nouveau influences, which were quite successful in Bordeaux in the 19th century.
While the railway station dates from 1923, La Café du Levant goes back even further: it opened in 1897. Though it had gradually suffered the prejudice of being regarded as just another “station bar” since the ‘80s, Le Levant has regained its prestige in recent years. 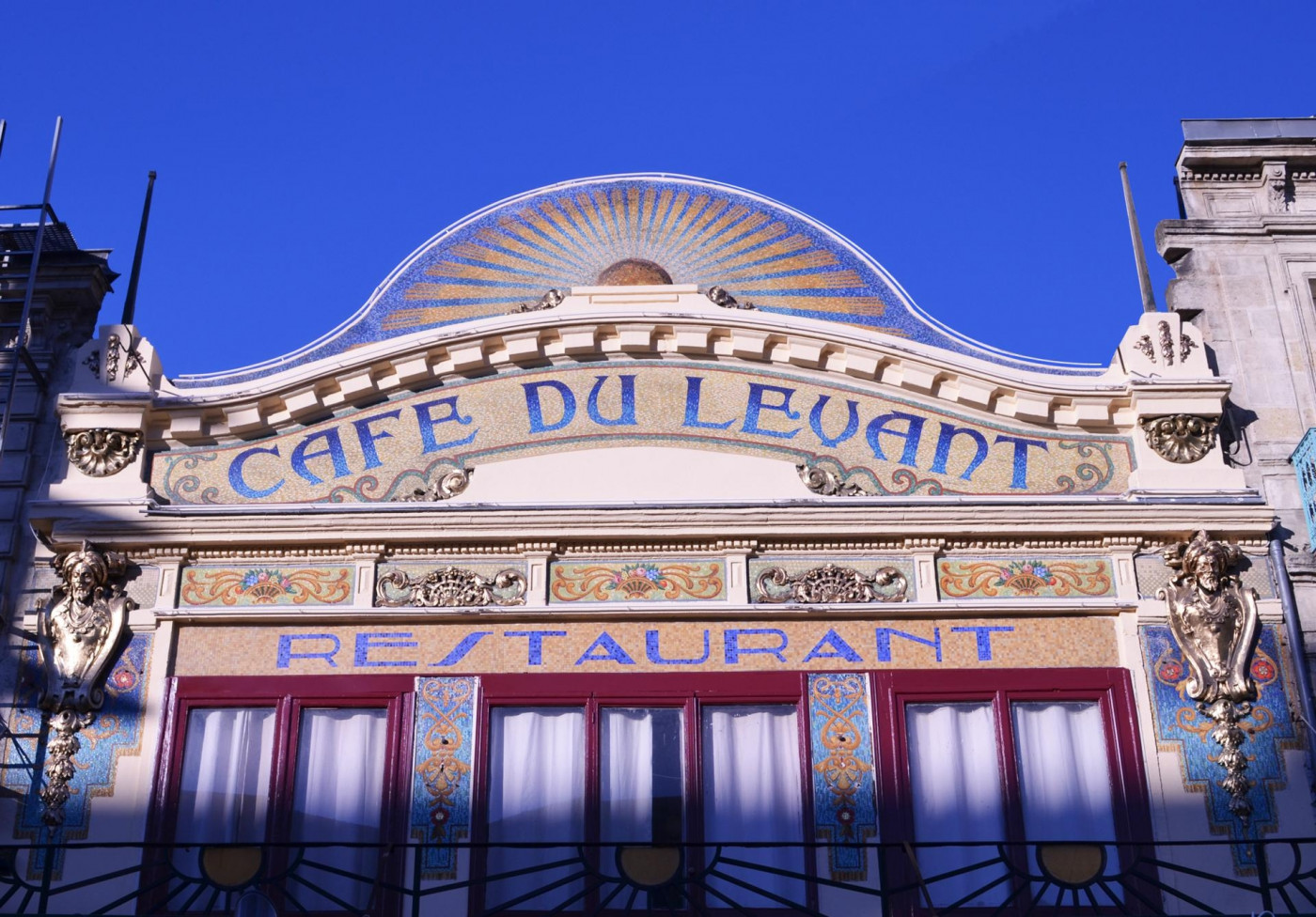 ONE LAST CUP OF COFFEE BEFORE THE REVOLUTION

Michèle Lacay was a maths teacher at the nearby Mirail high school when she took over the bar, a little forced by family events. The place was ideally located, halfway between the former faculty of arts and the Montaigne high school. It quickly became a haunt for students from the 60s and 70s and served as a first-aid infirmary during the May 68 uprisings in France.

Situated on the ground floor of a 1750 mansion listed as a Historic Monument, the Café des Arts still exudes a slight scent of rebellion for those who take the time to linger there.